With this information, you will be able to build a fuel system yourself. Whether it's for an standard car, a tuned car or a racing car. Speeding has built and helped with fuel systems for both street cars and winning race cars for over 10 years with very good results and now it is your turn to learn how to do it the best way.

We will cover all the parts to make you feel safe with your choices and how to connect and make them work together the best way.

When you read about different fuel parts below, you will feel safe with you choice of parts and you can overlook problems. This way you get a better and cheaper fuel system without trial and error.

A fuel tank must hold the fuel safely. It is mounted low and in the middle of the car. There you have a protected place with a low center of gravity.

This can be used to advantage if the car is to be tuned. It is really only if the original tank is not permitted according to regulations or if it has to be moved for constructional reasons that it is replaced with a so called fuel cell.

Original fuel tank usually has the fuel pump mounted in the tank in a so called fuel pump hanger. This can be converted to external fuel pumps, but then connections for this must be created, these are usually prepared on a aftermarket fuel cell.

Other connections that are located on a fuel tank and fuel cell are venting, refueling and sockets for fuel outlet / inlet. Inlet and outlet are located in the fuel pump hanger if the tank is equipped for internal fuel pumps. 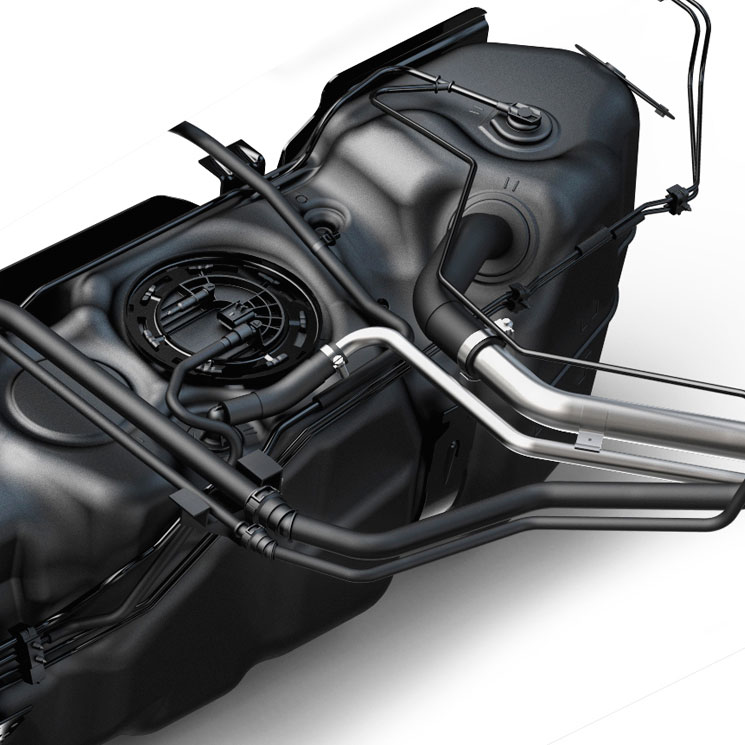 The connections needed for a fuel tank to work: 1. Refueling 2. Fuel out 3. Fuel return 4. Tank venting

The fuel filler is located well above the fuel level and are there for fuel refilling. When fuel is added the air inside the tank need to be evacuated. This is done through a tank ventilation hose. This hose is routed up to the fuel filler along with the fuel filler hose. This allow faster fueling. 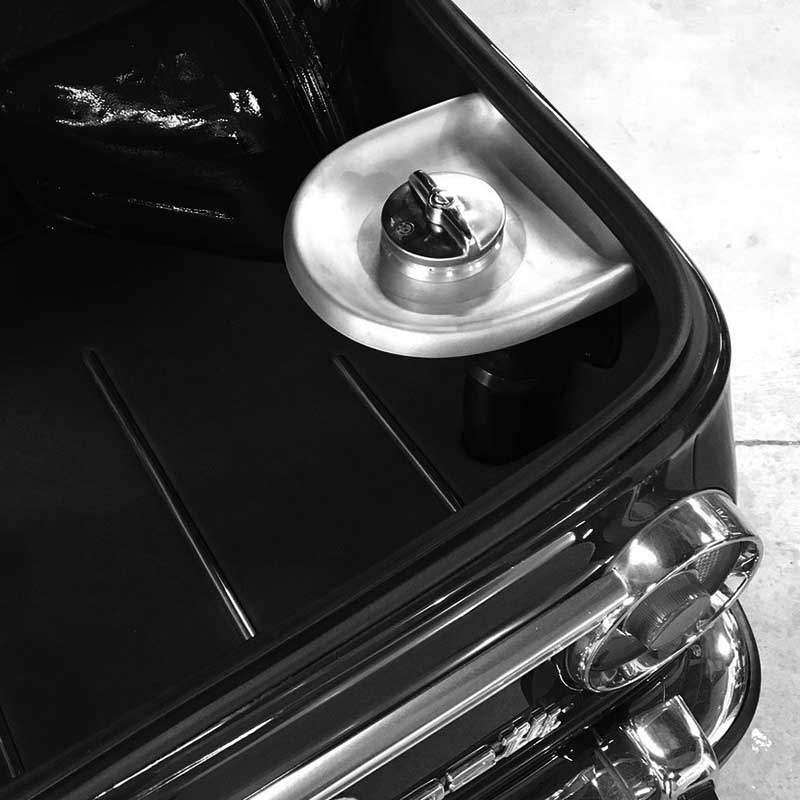 OEM call this the EVAP system. Then the gases are led back to the engine intake by means of an electronic valve. This is because the system must be closed.

Tank venting on an aftermarket fuel cell is usually called a roll over valve. This is then the venting, but it only leads out the fuel vapors in the simplest way in the open air. 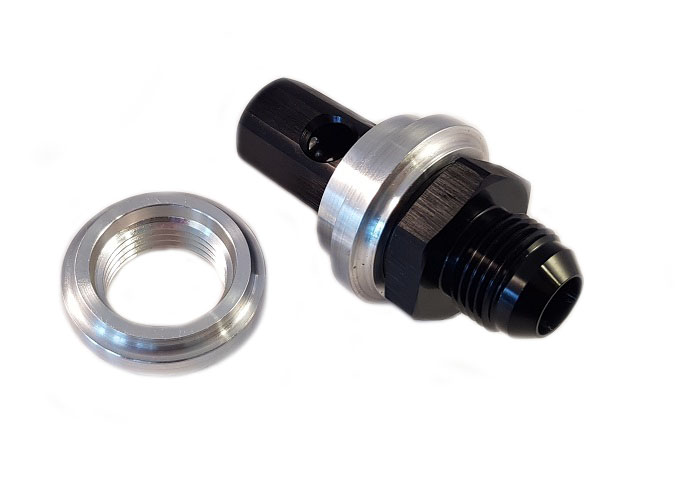 The roll over valve must be mounted vertically to operate. A hose from the valve must be led to as high a point as possible above the level of the fuel tank. This is so that fuel is not pushed out at g-forces laterally.

The fuel pump feed fuel from the fuel tank to the engine. It can be mounted in a tank or externally outside the tank. This is due to the design of the pump. An external fuel pump has threads on the inlet and outlet. An internal pump has a hose connection on the outlet and a quick connection to the pre-filter (inlet). 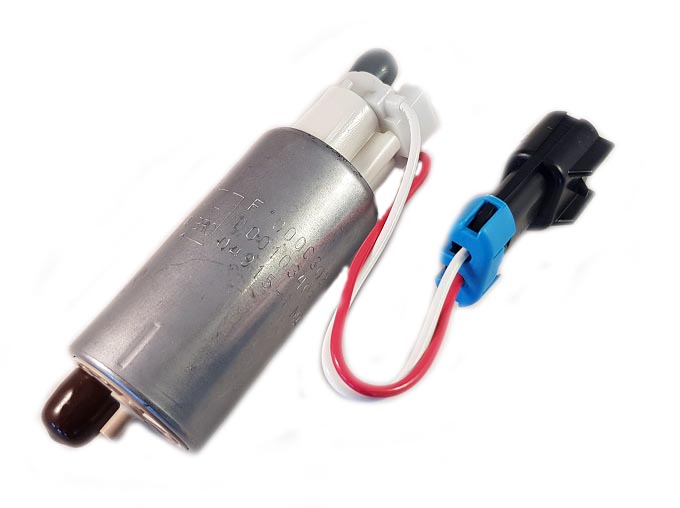 When refueling, coarser dirt can enter the fuel tank. The pre-filter of the fuel pump prevents this from entering into the system. 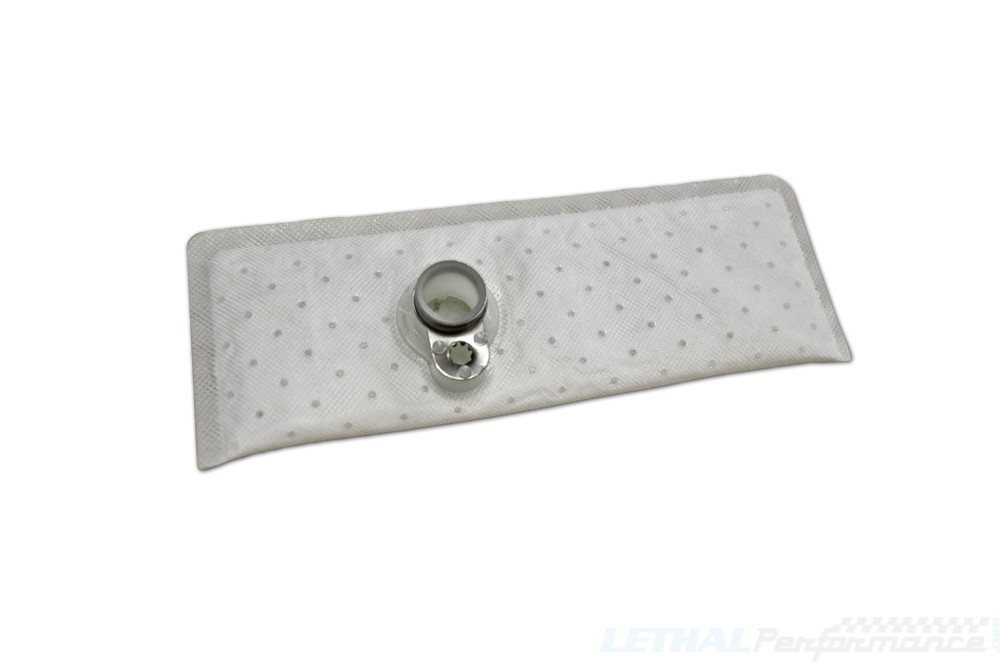 Original, the check valve prevents the fuel lines from being emptied. The fuel remains in the lines for a quick start.

Aftermarket check valves are not as good at maintaining the pressure afterwards, but they are made to flow better than the original check valves. When an engine is to be tuned, several fuel pumps can be used and if they start in steps, check valves are needed so that the fuel does not slip back through the pumps that is off.

Aftermarket = better flow = less seal = does not keep the pressure up as long as an oem check valves. 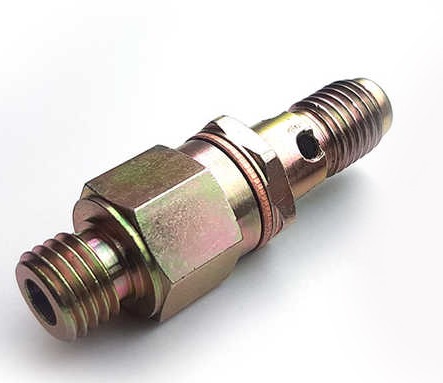 Original fuel pump hangers can also function a bit like a catch tank as the return fuel from the engine is recirculated here. Depending on the model, fuel level meters and sometimes also the fuel pressure regulator can be mounted here also.

Aftermarket fuel pump hangers can look different and often allow the installation of several fuel pumps. Some also have a built in catch tank, tank vent and fuel level sender.

Driving without a fuel pump hanger and instead using an external fuel pump is also common on rebuilt cars. 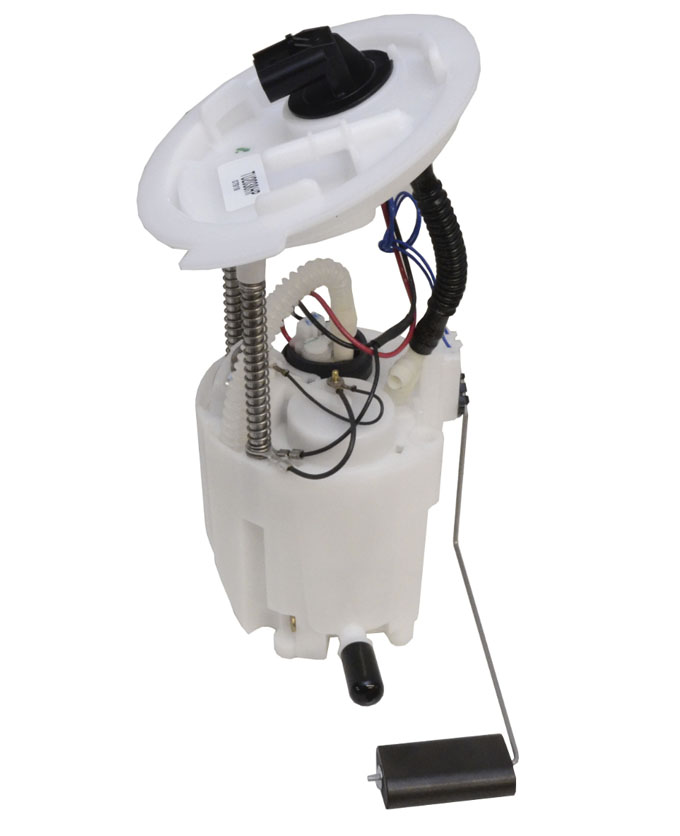 The connection of the fuel pump hanger to the fuel cell / fuel tank is model adapted. You use / rebuild the one that is already installed or if a ready made alternative is available to buy as an accessory.

An external fuel catch tank is not used standard (OEM). During heavy cornering / racing, the fuel in the fuel tank is pushed to the side, -away from the fuel pump. In this way, the fuel supply to the engine disappears.

To counteract this, the fuel is instead pumped to a catch tank that is filled up. Then another fuel pump pumps fuel to the engine from the catch tank.

Now there is always fuel in the catch tank at heavy cornering.

The catch tank can also be built into the fuel tank. But the same principle with two fuel pumps applies when one has to fill the catch tank and the other supplies the engine with fuel.

Fuel pumps can be located internally or externally in the catch tank. 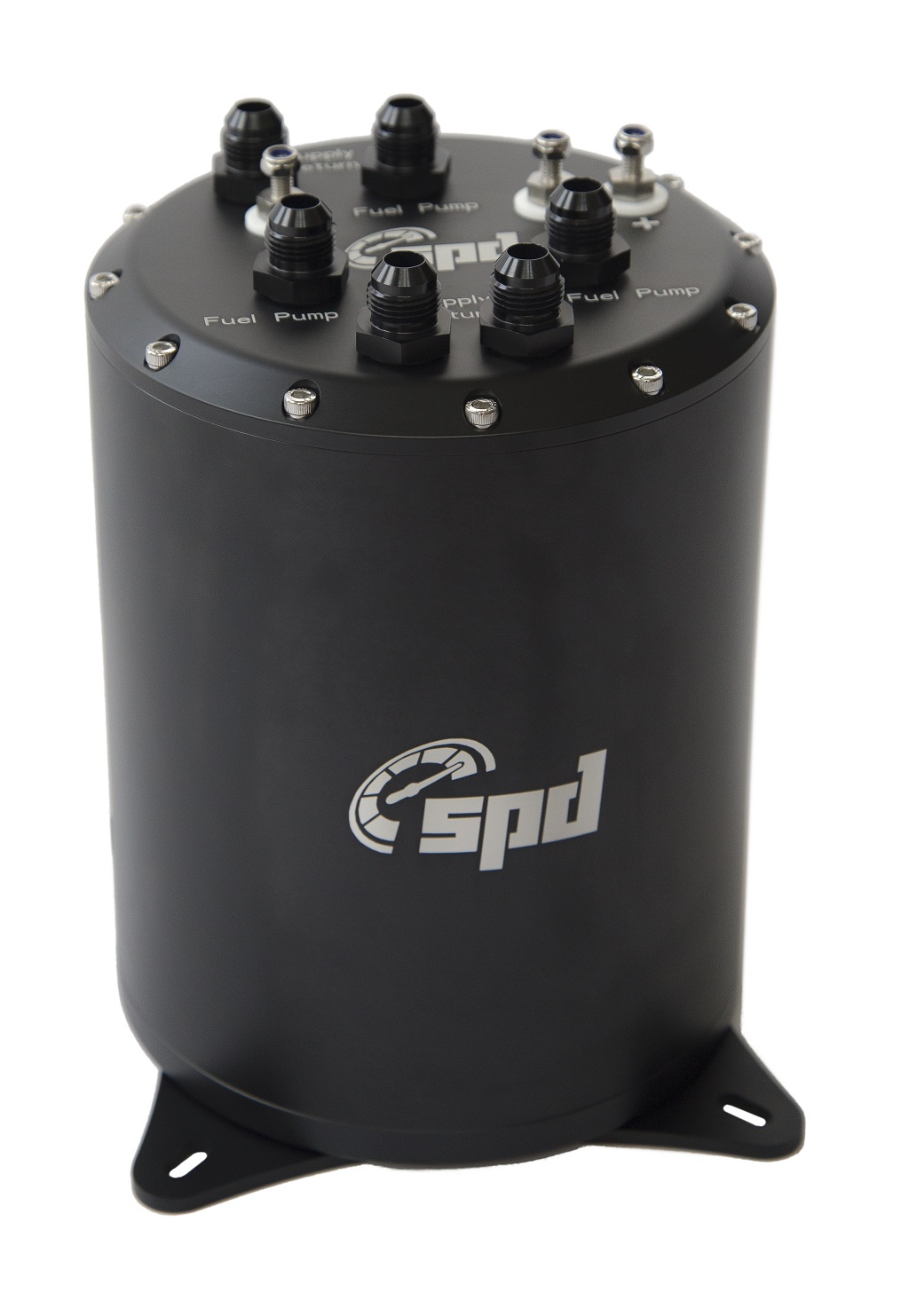 Connections on a catch tank are usually at the top. These are threaded to be able to easily adapt connections.
Electrical connections are often available to allow internal fuel pumps to be used.

Original fuel filters are often replaced with an aftermarket fuel filter if a car is tuned more as the flow will be higher.

The replaceable insert on an aftermarket fuel filter is made of a paper material or in stainless steel. Stainless steel is preferable as they last better and filter dirt just as well down to 10 microns. 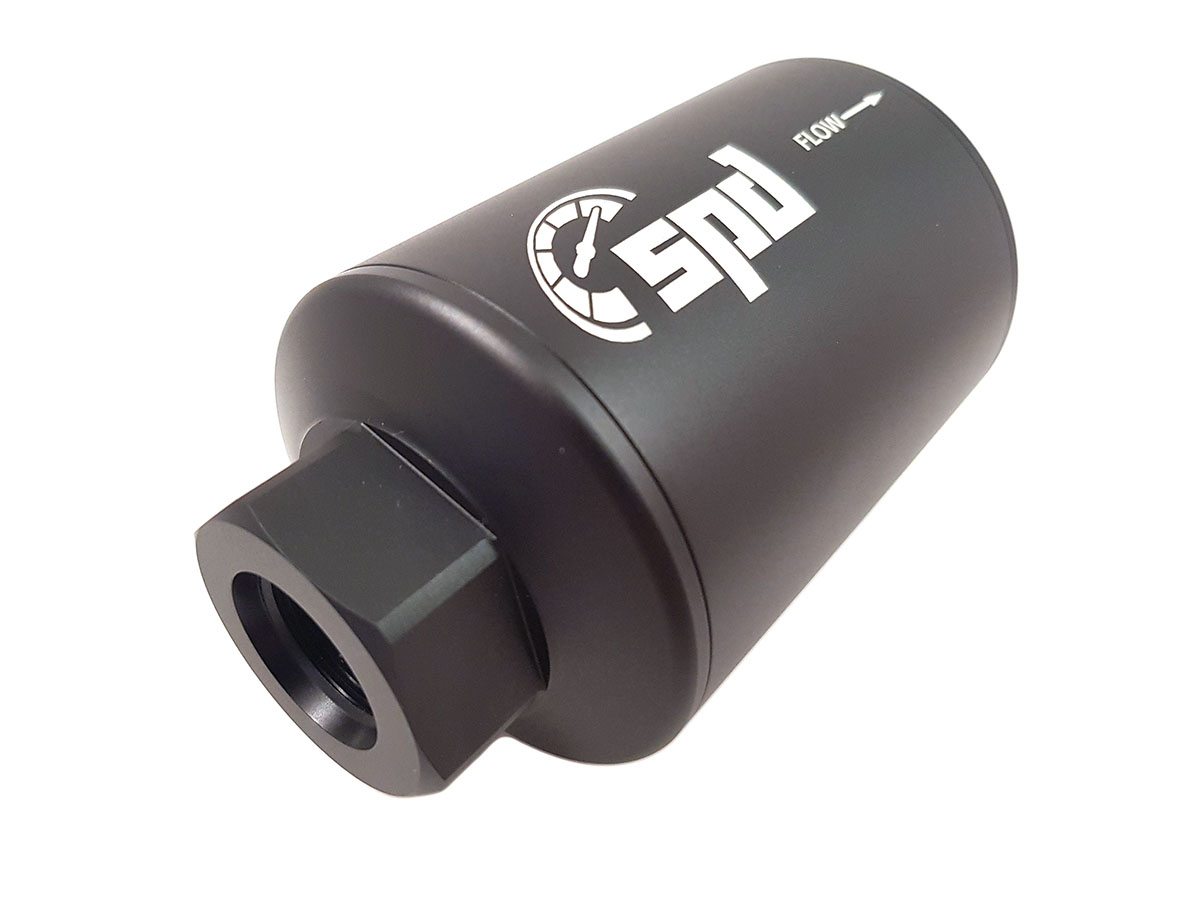 Fuel filters have one inlet and one outlet. Both are threaded so they can be easily connected to all possible applications.
Note the flow direction on the fuel filter.

A Fuel rail distributes the fuel between the different injectors that are mounted. Original fuel rail is good enough for a lot of power. The reason for this being replaced is because connections are often odd and an OEM fuel pressure regulator is mounted directly on it as a restriction. Instead of rebuilding originals, this is instead replaced by an aftermarket fuel rail.

The internal size of the aftermarket fuel rail is usually 16-20mm to be able to distribute a lot of fuel between injectors.

A model adapted fuel rail has the right distance between the injector holes to fit the engine. It does not necessarily have to come with model specific mounts. Check this before buying. 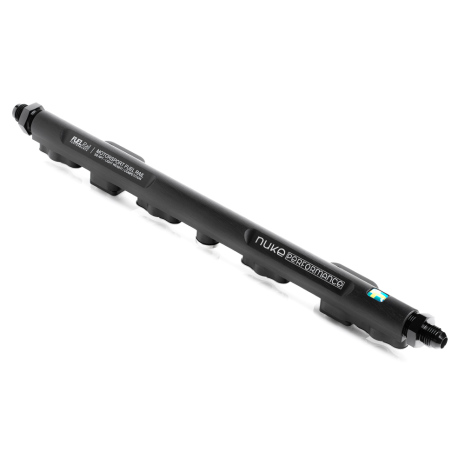 An aftermarket fuel rail has one connection at each end for easy installation. Additional outlets may also be available for sensors and alternative connections. Threads for brackets are available unless model adapted brackets are bought.

Injectors are the part that finally injects fuel into the engine using the control system (ECU). This can also have a filter mounted in the top.

When tuning an engine, more fuel is needed. Therefore, larger injectors are mounted.

Top feed injectors (EFI) are mounted between the intake manifold and the fuel rail. The length of the injector can vary, but the length used before is the one usually used again. 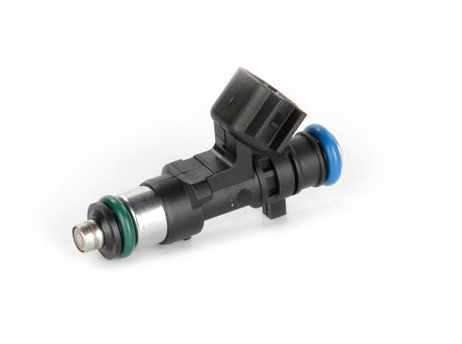 Top feed injectors for European cars usually have 14mm O-rings.
Other top-fed injectors can have 11mm upper o-ring. There are also cases with 16mm lower o-ring.

An EFI fuel system wants a certain pressure e.g. 3 bar. to then increase the pressure linearly in parallel with the engine boost pressure. This is so that the fuel injector can supply enough fuel. A fuel pressure regulator takes care of adjusting this. 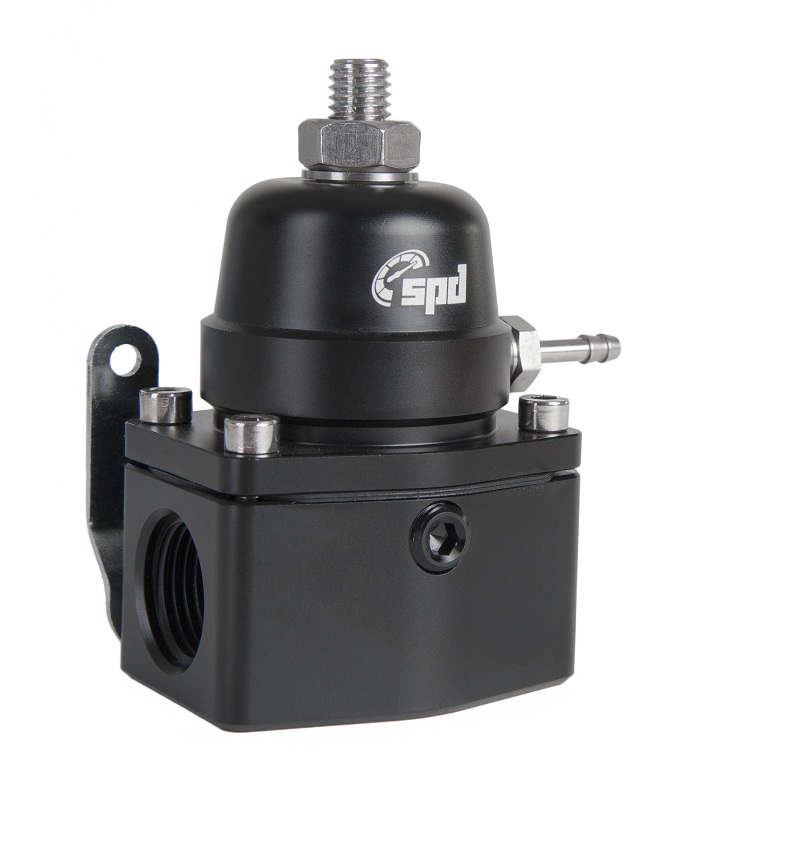 Threaded inlets / outlets are used for easy installation. There may be several inlets on a fuel pressure regulator so it can be used as a y-cross / split for V6 / V8 installations. Outlet / return port is located at the bottom.

A Y-cross / X-cross / split is simply used to divide several hoses or pipes.

If several fuel pumps are used or if you have a V-engine, a y-cross can be used connect these int one system / fuel line.

Aftermarket fuel pump hangers and fuel pressure regulators may have this built in already. eg 2-3 inlets and 1 outlet. 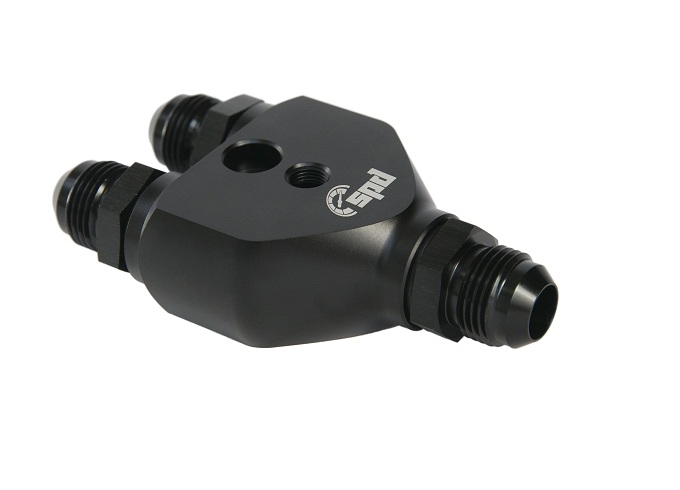 All components in a fuel system have a thread or hose connection. One for inlet and one for outlet at least. These fuel parts are connected with the help of hose and fittings.

Standard applications ofthen use a plastic hose that is heat crimped on connections. This is a very compact solution but nothing that can be done at home yourself. Therefore AN fittings and hose are used. With the help of these, all parts are easily connected together.

Do you want to use AN6 lines, for example? Simply adapt the products input / output to AN6 using adapters.

If you want to use classic 8mm hose and hose clamp, this also works well. Simply adapt the products input / output to the 8mm hose connection using adapters.

All this is easily done at home with a wrench if you want, completely without any special tools 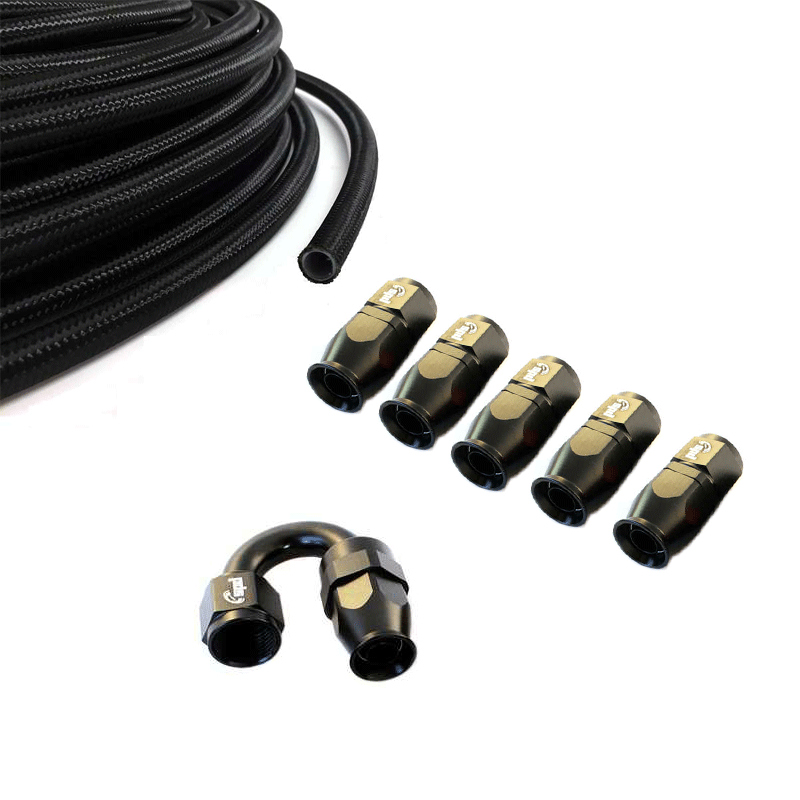 When you know what type of hose you should have: Adapt all products with adapters so this size can be used throughout the system.